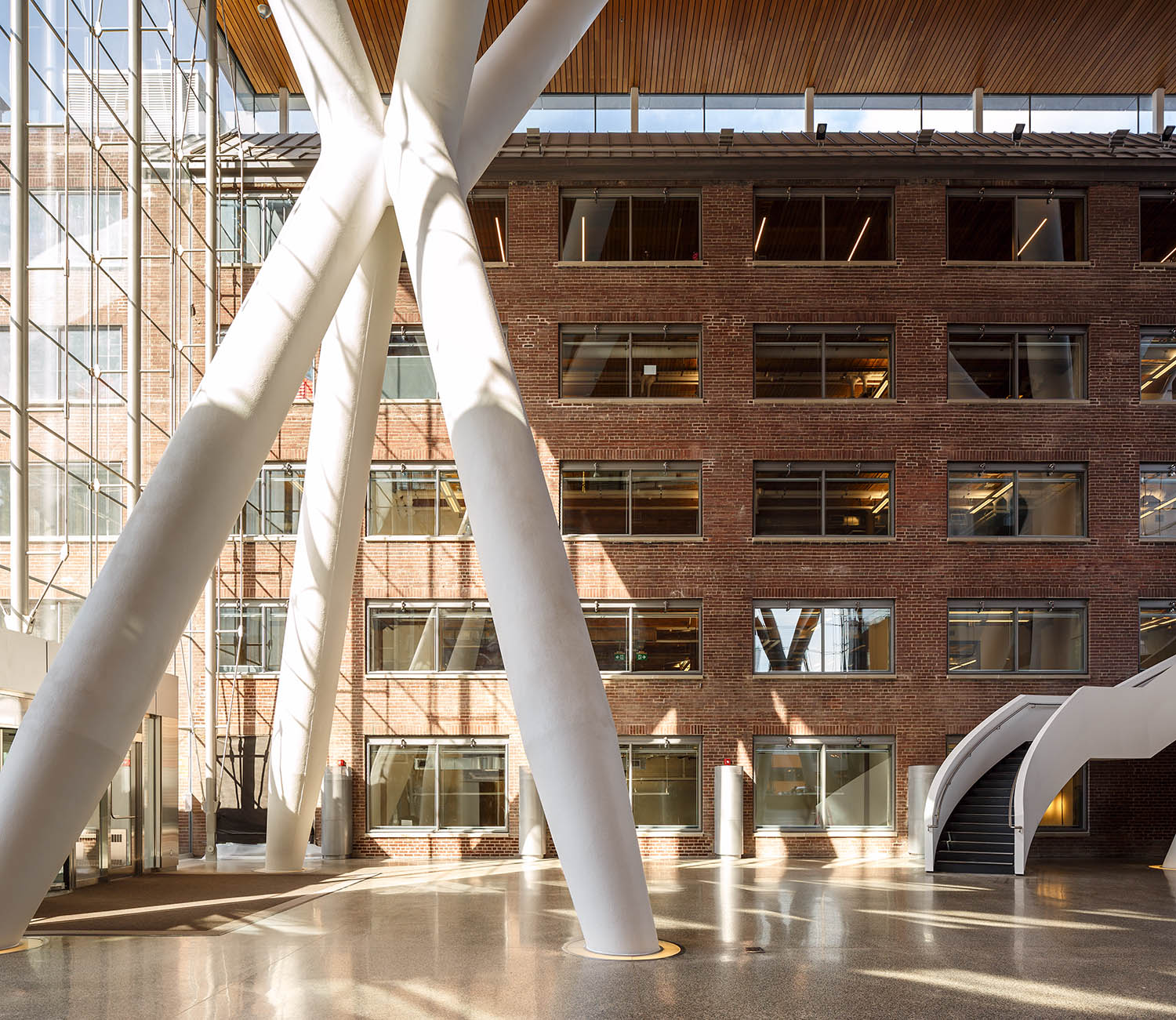 With the surging demand for office space in downtown Toronto, it was inevitable that developers would begin eyeing the city’s historical stock. Local firm Sweeny &Co Architects literally went above and beyond to increase the floor area ratio of a site in one such neighborhood.

In 2007, Sweeny &Co saw an opportunity to preserve two adjacent structures built with traditional brick-and-beam construction at the intersection of Peter Street and Richmond Street West. Principal Dermot Sweeny and his team proposed constructing a new 11-story office building on the site—but starting 80 feet in the air. The structure would clear the existing four- and five-story buildings in their entirety, with the exception of an expansive atrium at grade and transitions between the new and old buildings.

The buildings' owner, Allied Properties REIT, agreed. All that was left was how to execute the plan. Initially, the architects considered using box trusses to hold up the proposed 302,000-square-foot Queen Richmond Centre West above the atrium. But the approach would have required hundreds of visually messy cross-bracing members, says principal John Gillanders.

Instead, the architects teamed with local firm Stephenson Engineering to design and develop three mega supports. Dubbed delta frames, the 80-foot-tall frames consist of four upper and four lower legs that converge 40 feet in the air, like giant toy jacks.

Welding the legs to plates at the frames’ midpoints would not be enough to stop them from splaying. As a result, the team decided to secure the legs with more elegant—and much stronger—custom nodes, designed by local firm Cast Connex.

The team used 3D modeling and rapid prototyping to finalize the node’s shape and integration, while eliminating the need for shear studs and reinforcing bars in the node. “We kept working at it backward and forward until everyone believed it was not only beautiful, but that it would work and was manufacturable,” Sweeny says.

Cast Connex cast the steel nodes in chemically bound sand molds, each of which comprise 22 pieces that lock into a 3D puzzle. Based on fluid-dynamics analyses, the fabricator determined they had to pour nearly 50,000 pounds of molten steel into the molds in less than 60 seconds to achieve uniform nodes. The sand molds disintegrated during the manufacturing process, but the tooling to make future molds remains.

Hamilton, Ontario–based steel fabricator Walters Group used 2-inch-thick rolled steel to form the delta frames’ 40-inch-diameter legs. The legs and nodes were then welded together on site, and the frame was pressure-filled with concrete from the bottom up. Each delta frame can support nearly 18 million pounds—the equivalent of approximately 400 tractor-trailers.
Juror Joyce Hwang said, “This was a well-articulated structural innovation—the way the frames soar above and hold this large mass.” Although juror Steven Rainville thought that the team had other options to achieve its objective, he appreciated its efforts to perfect the frames’ look and behavior. “It’s using methodologies that are progressive in how they resolve the structural solution,” he said. “But the result of it is also quite nice, architecturally.”