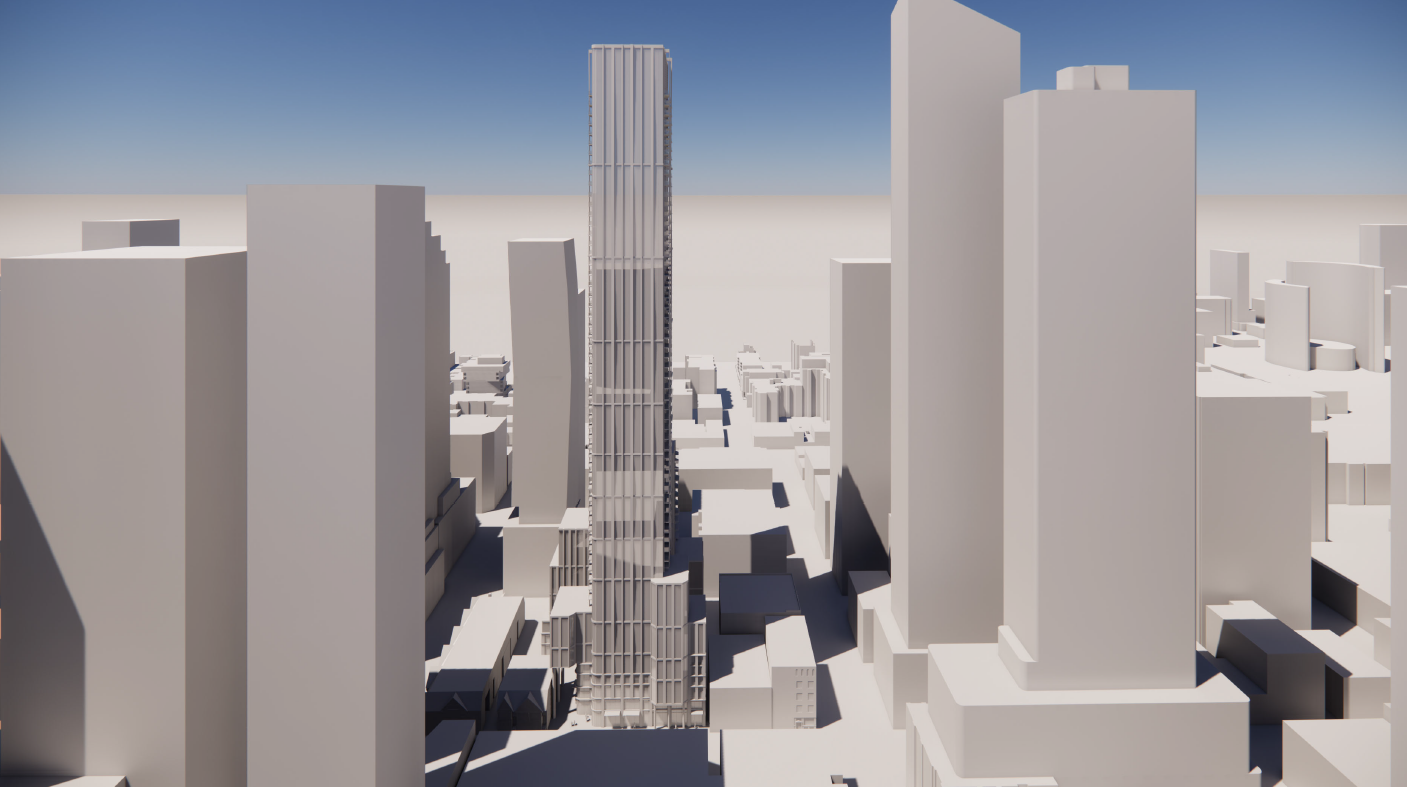 A partnership between CentreCourt and CreateTO — the City of Toronto agency that develops and manages the City’s real estate assets — could bring a new tower to the Entertainment District, overlooking a soon-to-be public park to the north at 229 Richmond Street West. The 60-storey development at 260 Adelaide Street West would bring over 800 residential units.

The 2,754m² site is located mid-block on the north side of Adelaide Street West between Duncan and John streets. It currently houses the Toronto Fire Station 322 and two low-rise buildings with commercial and restaurant uses. In May and October 2021, directives from the CreateTO Board and City Council approved the relocation of the fire station two blocks south to Metro Hall and the redevelopment plan for 260 Adelaide which would include affordable housing, grade-related retail, a new paramedic post, and community space.

The King-Spadina East Precinct area has seen an explosive number of recent developments, approvals, and proposals, primarily high-rise buildings (40s, as tall as 84 storeys). This 'underutilized' property is flanked to the west by late 19th century row housing (designated under part IV of the Ontario Heritage Act) and to the east by additional low-rise buildings occupied by restaurants and bars, including 244 Adelaide Street West, which is listed on the City’s Heritage Register. To the immediate north is is one of the few remaining undeveloped parcels downtown, a surface parking lot currently used as an outdoor patio. It is planned to be redeveloped into a public park by the City of Toronto through Create TO, a small piece in the puzzle of adding green space on the parkland deficient area. Below is a shadow study image, one of a full series, this one indicating the shadow that would be cast by the proposal just after noon on the Summer Solstice.

Replacing the existing buildings on the site, the 60-storey, 199.3 metre-high building is designed by Sweeny &Co Architects. As illustrated in the axonometric drawings below, its podium is shaped to form a volume with various articulations and step-backs to respond to the surrounding context and create public spaces and passageways that are characteristic of the King-Spadina area. The proposed building has a total gross floor area of 54,316m² (52,406m² residential), resulting in an overall density of 19.65 FSI.

Looking southwest (L) and northeast (R) to the proposal, image by Sweeny and Co Architects

Along Adelaide Street, the base treatment takes cues from existing warehouse buildings on the street’s south side. For example, as described in GBCA Architects' Heritage Impact Statement, the proposal is marked “by similar facade compositions, design and organization, yet articulated in a contemporary manner, without imitation or replication (instead of a thick brick vertical pilasters and spandrels, the proposed base massing has thin vertical and horizontal members, with additional divisions in the window fenestration pattern, similar to the existing windows of the Purman Building.”

The main elevation of the development is set back from the south lot line to provide a 6.5-metre-wide sidewalk and enhanced public realm enhancement opportunities along Adelaide. This setback is maintained throughout the entire height with step-backs on upper floors to define the mass as it rises in height.

At ground level, the residential lobby, located in the middle, is flanked by retail spaces, which, in addition to a space at the northwest corner of the site along Nelson Street, collectively total 748m². In addition, there is a 142m² community space and a 233m² paramedic post, both accessed from Nelson Street. A double-height passageway cuts from the western side of the site on Adelaide through to Nelson. It creates a new mid-block connection and serves as a link between the planned public park to the expanded public realm along John Street.

Floor 2 comprises an additional 787m² of community space and 682m² of combined indoor and outdoor residential amenity space. Dwelling units begin on level 3 — interrupted by Floor 9 which features the remaining contiguous indoor and outdoor amenity spaces — and rise up the tower to Floor 60. The tower, situated in the middle of the site, is oriented north-south, with a floor plate of 800m² GCA. According to the planning rationale, it doers not impact upon "the existing view termini along John and Duncan streets."

Looking south across Nelson Street to the proposal, image by Sweeny and Co Architects

The 848 dwelling units are proposed in a mix of 52 studios (6%), 582 one-bedrooms (69%), 127 two-bedrooms (15%) and 87 three-bedrooms (10%). Adaptable design measures would be employed to convert up to 15% of the smaller units into two- or three-bedroom units. The proposal includes up to 30 percent of all residential units as affordable units.

The building would be equipped with 97 vehicular resident parking spaces within a 2-level below-grade garage, accessed via a ramp located off the easterly (existing) public lane, which would also service the loading area. Additionally, there would be 945 bicycle parking spaces, of which 763 spaces will be for residents, 176 for visitors, and 6 for retail.