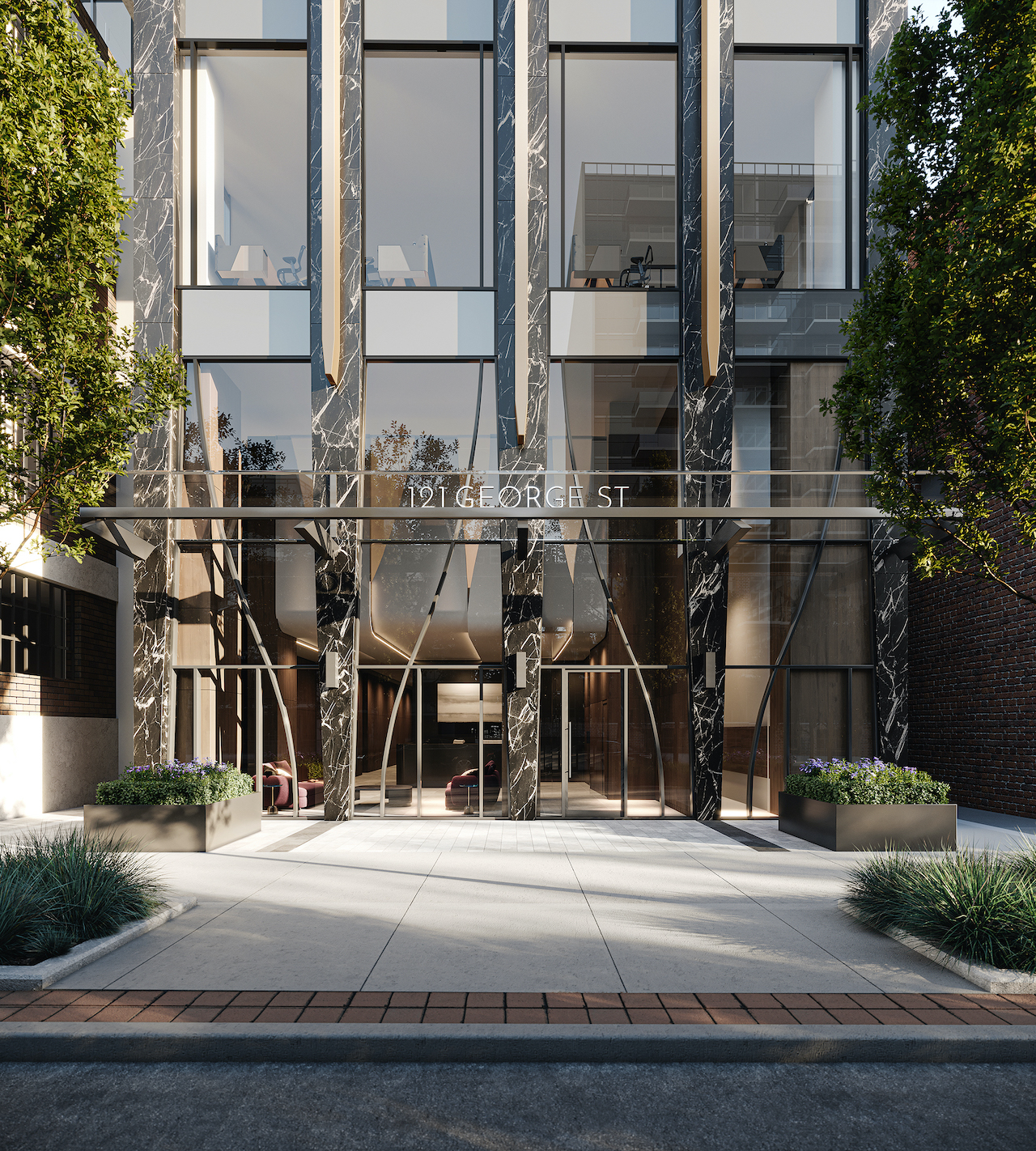 There is a new condo on the horizon that will bring a unique mix of old and new to Downtown Toronto's St Lawrence neighbourhood. On the southeast corner of Richmond and George streets, Aterra Group and DiamondCorp are bringing Celeste Condominiums, a gleaming modern tower set between heritage facades. Designed by Sweeny &Co Architects, the mixed-use tower will climb 40 storeys, offering 516 condo suites held above the office and retail spaces in its base.

Looking east to Celeste Condominiums, designed by Sweeny &Co Architects for the Alterra Group of Companies and DiamondCorp

At street level, architects at Sweeny &Co have let history define the building’s roots with brick-clad heritage facades that will house street-fronting retails and two levels of office space. Immediately to the south of Celeste are offices within the three-storey, red brick building located next door at 109 George Street. Although it is not part of the development, the developers have made a Limiting Distance Agreement with the owners of the office building. This means that Celeste's south windows and balconies will never be blocked by another building rising beside them, leaving their views intact in perpetuity. This also allows the developers to make full use of Celeste's floor plates, stretching them right up tight to the lot lines, wasting no space.

Top down view of Celeste and neighbouring office building, image courtesy of the Alterra Group of Companies and DiamondCorp

South of the office building, meanwhile, is open space currently used as a surface parking lot: it will be redeveloped into a park space, planted with trees and other greenery, and feature seating arrangements handy to residents of Celeste and Alterra's neighbouring development of Post House Condominiums, to share and enjoy with others in the neighbourhood.

Publicly Accessible Space to be created next to the development, image courtesy of the Alterra Group of Companies and DiamondCorp

Celeste itself will boast outdoor space on both its ground floor, and on two wraparound terraces. Its rooftop terrace will be situated atop its 40th level – offering 6,500 ft² of rooftop sky lounge area with panoramic views of the downtown core, featuring the CN Tower and Lake Ontario. A unique feature of the terrace will be its viewing scope, for residents to use for an even better view of the city.

Rooftop terrace with city view, image courtesy of the Alterra Group of Companies and DiamondCorp

Heading inside, Celeste will offer a total of 18,000 ft² of amenity space for residents to enjoy. It will all start from the double-height lobby that will front onto George Street. Up on the fourth level is where the majority of the amenities will be found, including two party rooms that will offer lounge seating, a fireplace, kitchenette and dining area, and a private screening room. One of the two party rooms will be connected to an outdoor terrace, which will have a barbecue area, fire pit, and lounge seating for residents to share.

Double-height lobby entrance, image courtesy of the Alterra Group of Companies and DiamondCorp

The fourth floor will also be home to two private board rooms for residents who need to get some work done, as well as a children's play area which will be located kitty-corner to the building's fitness centre. The fitness centre will offer a yoga area, free weights, spin bikes, and other cardio machines, and will be connected to the outdoors through its outdoor fitness deck.

Celeste's suites will range in tenure, from one to three bedroom layouts. All suites will be open concept, and have their own private balconies. The interiors of the suites will feature warm finishes, and have large windows to maximize the natural light in the living spaces.

Potential suite layout, image courtesy of the Alterra Group of Companies and DiamondCorp

Centrally located, Celeste will be nearby many popular neighbourhoods in Downtown Toronto including the Financial District, Dundas Square, St Lawrence Market, and the Distillery District. The building will also be within close proximity to post secondary institutions including George Brown College and Ryerson University.

The site will also be well-served by transit, with Queen subway station located just a short walk from the site, and the King and Queen streetcars running past the site. The new Ontario Line is also planning a new stop just 300 metres from Celeste, which will eventually connect residents all the way to Exhibition Place in the city's west, and to the Ontario Science Centre in the city's east.

Location of Celeste Condominiums in downtown Toronto, image courtesy of the Alterra Group of Companies and DiamondCorp

Celeste Condominiums is expected to commence heritage retention work in fall of 2022.