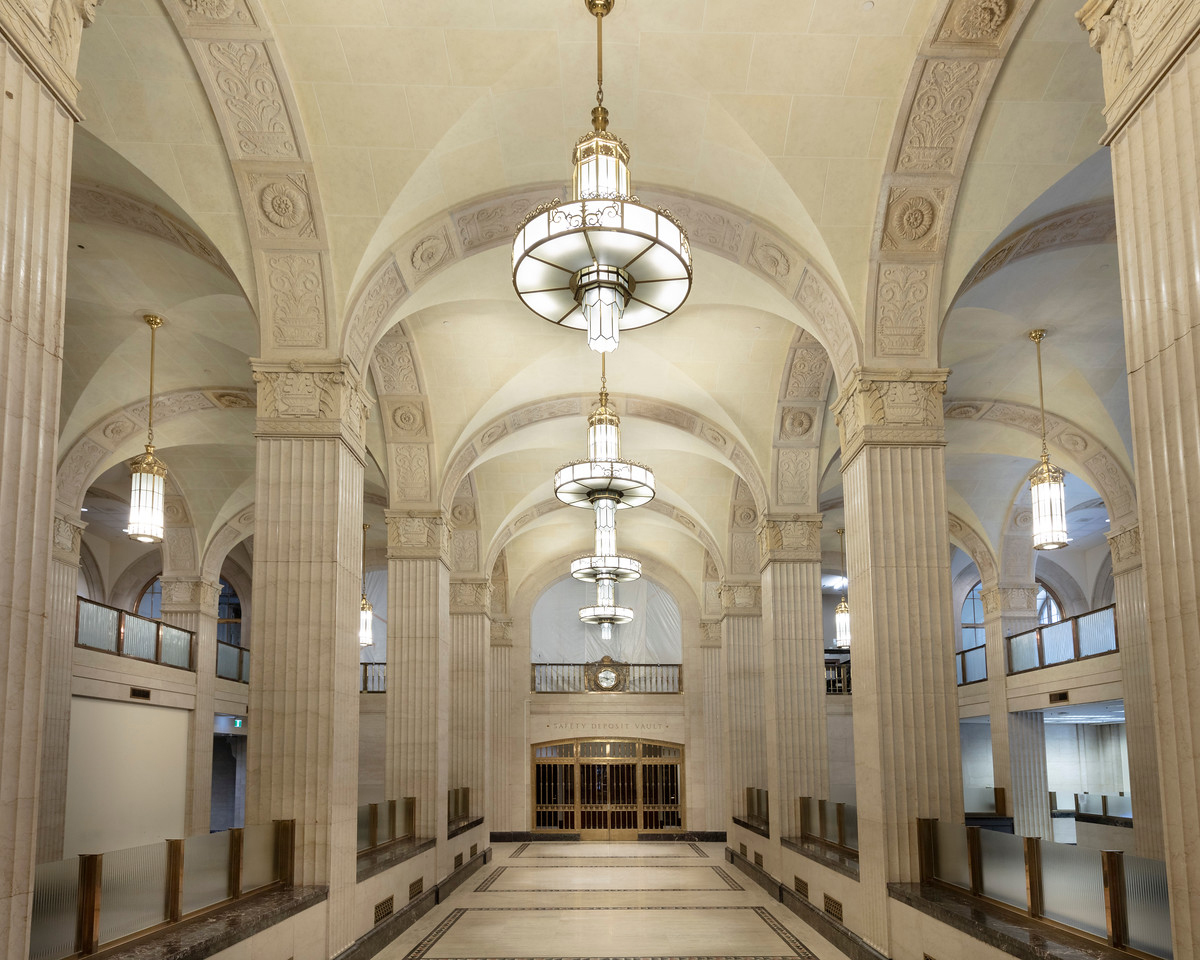 A landmark Downtown Toronto heritage tower on Bay Street has been reimagined by Menkes Developments, and now glitters in gold with antique interiors paired with modern designs from B+H Architects. 320 Bay is the address of what was the Canada Permanent Trust Building, now referred to as 'The Permanent.' It was acquired by Menkes in partnership with TD Asset Management in 2019, and has now officially reopened, featuring its new, modernized interiors.

Sean Menkes, Vice President of Office/Retail at Menkes Developments, told us "320 Bay was a unique opportunity presented to us by an existing partner of ours, TD Asset Management, who we are also working with on Sugar Wharf, our project on the waterfront. We set out to rebuild it from the inside out, while leveraging and accentuating the heritage features of the building that originally attracted us to it."

Front entrance of the lobby, image by Paul Casselman Photography courtesy of Menkes

Located on the southwest corner of Bay and Adelaide streets in the Financial Core, the historic Art Deco,18-storey, 300,000 ft² office tower was designed by prominent Canadian architect Henry Sproatt, and constructed between 1928 and 1930. The exterior of the building boasts a limestone facade that is decorated with gargoyles and other intricate carvings. There was an addition made to the building in the 1990s located next door at 304 Bay, which has now been linked to the lobby of the 320 Bay entrance, creating one public lobby.

"We demolished the facade of 304 Bay, and created a new entry to the building that's not only visually striking, but also more approachable," said Menkes. "We did this by removing three steps up from the sidewalk that previously existed, and flattening out the floor level so that would be more accessible from Bay Street."

"We also rebuilt a whole new lobby. We cut back the slab and opened up the space, creating a new direct connection through Toronto's underground PATH network to First Canadian Place, and finished it in first class materials that reflect the heritage of the rest of the building," said Menkes. "Some of those features include significant electrical and mechanical upgrades, a destination dispatch elevator system, new concrete floors, new washrooms, new accessible tenant terraces, and a brand new bicycle storage facility that is located on the basement level."

The underground bicycle parking operation is fitted with change rooms and showers that can be accessed by a ramp and stairs from the main lobby.

"320 Bay was a rare opportunity because we were able to completely de-tenant the building, which allowed us to shut it down and to perform a two-year, full retrofit of the building." Previous tenants are now moved back into the building, with the addition of some new ones – including B+H Architects – who are responsible for the design of the building's interior restoration. The firm has now taken over 23,008 ft² of space in the refurbished building for its new Toronto offices.

In addition, B+H also provided the design direction for the key public spaces, preserving the building's historical architectural elements while balancing them with new, modern amenities. Inspired by the 1922 discovery of King Tut's tomb, bas-relief brass panels on the elevator doors feature a mythological figure holding a cornucopia and a model of the new 18-storey tower. The elevator doors have been refurbished, and are a defining feature of the building's juxtaposition of modern and heritage elements.

"Since it is a heritage building, there were a lot of elements that were important for us to clean up and return to their past glory," said Menkes. "This included things like the building facade, the lobby of the original 1931 building, and the grand banking hall of the former branch of Canada Permanent Trust – which was who the building was originally built for in the 1930s. Certain components of Canada Permanent Trust’s former office were also necessary to be preserved."

"For the parts of the building that were not designated heritage," continued Menkes, "we took the opportunity to improve them from old to new, and fit them with all of those bells and whistles that we are used to with our new construction projects." This included adding sustainability features to the building, like new high efficiency base building equipment, occupancy sensors, meters, all of which together will work to reduce energy demand in the building.

"There was formerly a mezzanine that stretched along the lobby to the east, which made the space feel very cramped and dark," said Menkes. "We cut back that mezzanine, creating a double height volume resulting in a much airier lobby with higher ceilings, and demolished rooms that the previous tenant used for banking operations and opened that up entirely to create a sightline to the west to First Canadian Place."

"We also exposed the steel columns and painted them with fireproof paint, in an effort to really highlight the heritage of the building, and to allow the structure to really tell the story of the building."

To finish off the project, Menkes shared that they are targeting a restaurant for the ground floor banking hall. The company hopes that the building will stand to offer a unique opportunity to work in a space offering both old and new features for its tenants and visitors alike.

WIC wins in 2 categories at The 20th Annual Rex Awards