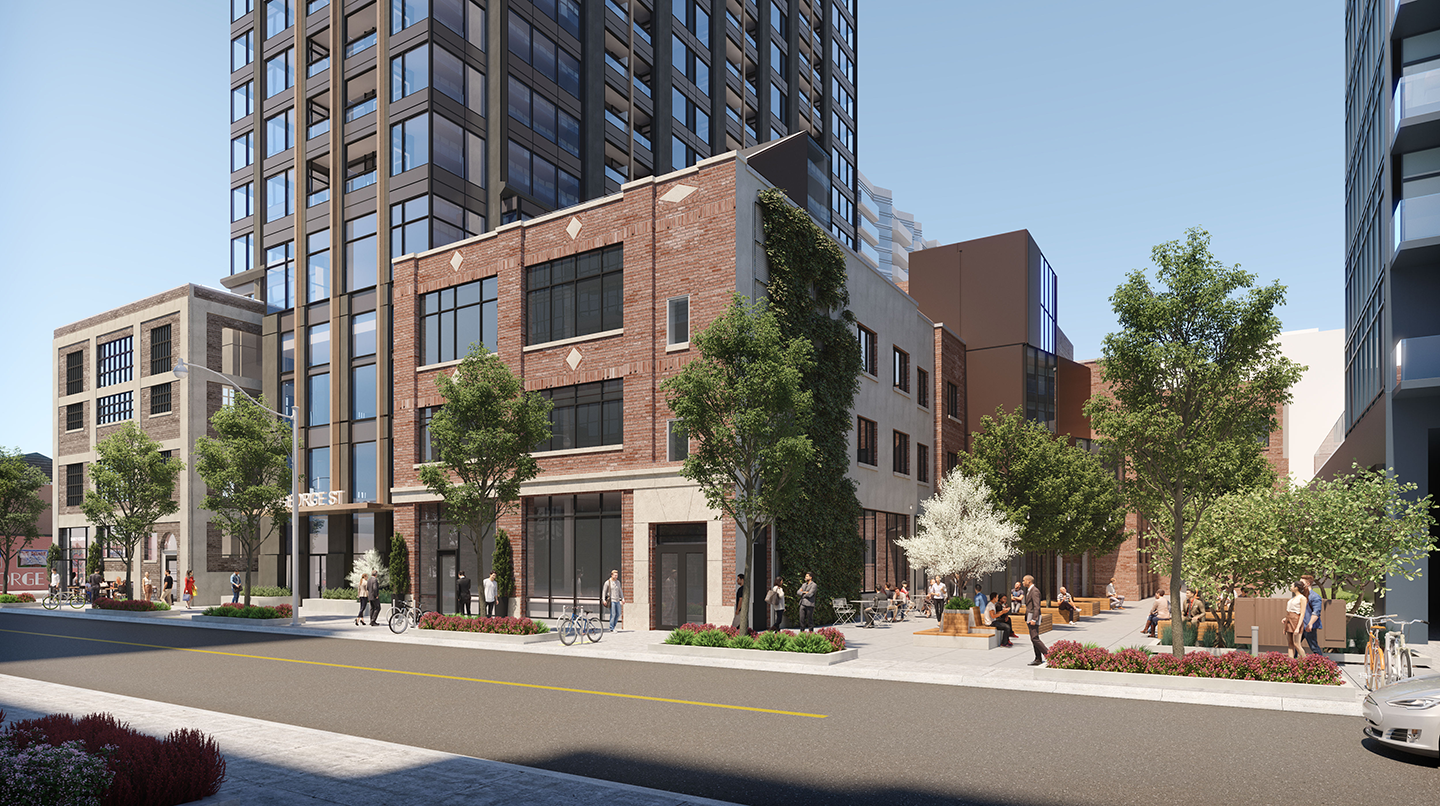 While the last couple of years inspired some people to temporarily move away from Toronto, for true urbanites, the time for “trying on” the suburbs has ended.

Today, many are returning to the core, and those who live for the city’s energy — especially those who spent some time away — are seeking dwellings in the heart of it all.

And now, rising at just the right moment, Celeste Condominiums is poised to meet every Toronto-lover’s needs: think top-tier amenities, suave style, and the inherent sense of community that can only be found in the lively downtown core.

The project — a partnership between Alterra and DiamondCorp — will be situated in the heart of all the action, rising where George Street meets Richmond Street East.

Set to stand 40 storeys, Celeste will house 516 suites that range from 1- to 3-bedrooms. Boasting a balcony for every unit(!), each abode will offer incredible views of the building’s surroundings — the city, its skyline, and of course, Lake Ontario.

But even more often than taking in the sights, Celeste’s residents will be stomping the pavement of the building’s neighbourhood. Just steps away from the development are institutes for higher education, including George Brown College and Ryerson University. The Eaton Centre, with all its shops and eateries, can be reached on foot in minutes, while TTC access via both Queen and King subway stations means that further urban pastures — Roncesvalles, The Beaches, Yorkdale Mall, Yorkville, and the proposed East Harbour included — are easily accessible.

And speaking of access to spaces beyond the immediate neighbourhood, the future Ontario Line will boast a station a mere 300 metres from Celeste. With this new transit addition, residents will be directly connected to 15 new stations that run from Exhibition Place, through the core, up to the Ontario Science Centre. Service will run every 90 seconds, offering unmatched access to all of the best Toronto has to offer.

While Celeste is truly located in the heart of it all, the condominium also boasts a special something that most downtown condominiums don’t: a carefully-considered, aesthetically-pleasing exterior.

Thanks to the build’s George Street address, the project is rising among tree-lined front entryways and centuried architecture. While the offerings of downtown’s truest essence are just around the corner, residents get to enter their abodes from a quaint and classy streetscape… and this is without even mentioning the beauty of the build itself. Imagine: a classically contemporary high-rise, finished with rich tones and chic champagne, that’s flanked by a brick-clad heritage base. With inspiration gleaned from the likes of the Rockefeller Centre, and the Chrysler and Empire State Buildings, Celeste brings a modern twist to some of today’s urban greats.

Meanwhile, where amenities are concerned, the building’s interior boasts a selection of the best. Across a total of 18,000 sq. ft., the roster of offerings includes a 24-hour concierge, an inspiring co-working lounge, and party rooms complete with fireside lounge seating, a kitchenette, and dining tables. Furthermore, Celeste serves up a state-of-the-art gym that’s home to a yoga space, spin bikes, strength training, cardio machines, and more, plus an indoor-outdoor play area, a dedicated pet zone, and a new public parkette.

Inarguably, the amenity that leans most into the building’s “true downtown” characteristic is the 40th floor rooftop space. Offering the chance to be in the centre of it all, but with a calmer and quieter vantage point, the ambiance of this sky-high outdoor space is something that simply can’t be experienced outside the downtown core. The views this area will offer — both during daytime and at night — will give “unmatched” a new meaning.

Indeed, after a couple quiet years, the core is making a comeback. And if you’re someone who’s craving the energy, action, and excitement that only downtown Toronto can offer, the chance to lay down roots at Celeste isn’t one to pass up. Crafted with right-sizers, students, young professionals, and the truest of urbanites all top of mind, this condominium exudes a higher love for true downtown living.