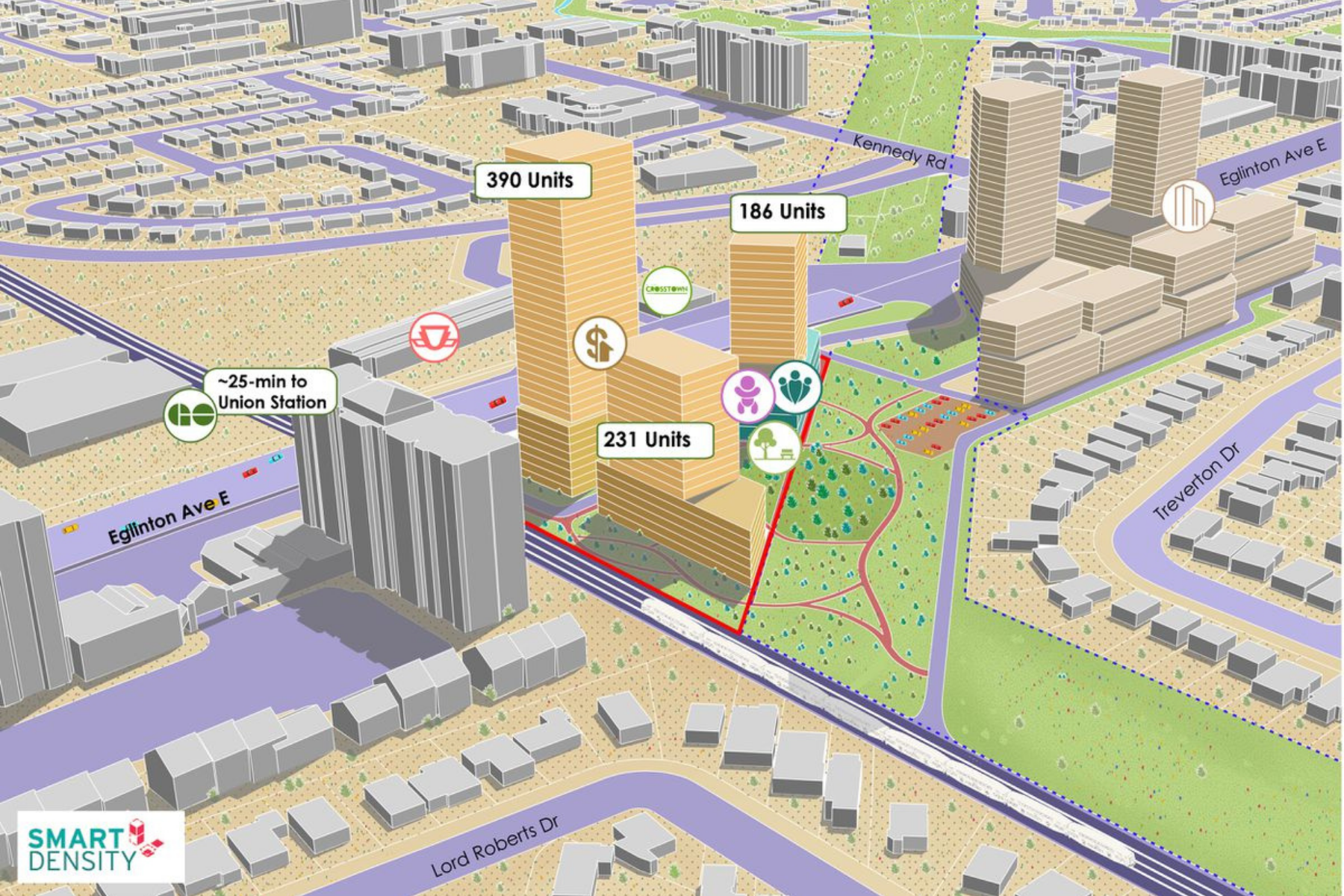 Stand at any corner at the windswept intersection of Kennedy Road and Eglinton Avenue East and look across to any other, and it’s like déjà vu all over again. Nothing rises over five storeys – save for one 1990s tower in the distance – and strip plazas and gas stations dominate the flat landscape.

Yet, in the middle of Eglinton, work progresses in what was, formerly, six lanes of blacktop as the 19-kilometre Crosstown light-rail line prepares to open in 2022.

Standing 500 metres away on a triangular, city-owned piece of land a stone’s throw from the TTC’s Kennedy station and the Kennedy GO commuter station, Rich Analytics chief technology officer Mark Richardson marvels at the massive parking lot at our feet and the empty air above our heads: “So you’ve probably got about $15-billion worth of transit infrastructure that intersects at this corner – and there’s nothing here.”

“This is actually the only intersection in the city that has a GO, a TTC and an LRT,” says architect Naama Blonder of Smart Density.

Ms. Blonder, Mr. Richardson and the four others assembled here – Andrea Adams of affordable housing builder St. Clare’s; Diane Dyson of community builder The Neighbourhood Group; urban planner Alexei Guerra of Sweeny & Co.; and Smart Density’s Joshua Papernick – aren’t here to throw shade. Rather, they’re here to discuss their advocacy and pro bono work that ensures that, when the City of Toronto does build affordable housing on this site through its “Housing Now” initiative, the maximum number of units get built.

They have reason to be wary. In January, 2019, Phase One of Housing Now presented 11 sites to the public. Of the four “fast track” build-outs, Mr. Richardson says, “two of them were really successful, one was not really successful and the other one was a total disaster” insofar as the Warden Ave/St. Clair Ave. E. site is three times the size of Kennedy/Eglinton, yet only 600 units will be built there. Many of the sites haven’t gone through the approvals process yet.

“From a site plan perspective, they don’t utilize the land,” Ms. Blonder says. “I’m not even talking about height.”

Again, these HousingNowTO volunteers are not throwing shade at the City of Toronto’s efforts; there is a very real affordable housing crisis and the city is finally working hard to address it. It’s just that after seeing how the first 11 didn’t squeeze enough proverbial juice out of the lemon, they decided to react with greater speed when Round Two’s six sites were announced in May, 2020 (most on parking lots by transit, which Mr. Richardson calls “lazy land”).

Within three weeks, HousingNowTO had produced detailed site plans, renderings, shadow studies and all sorts of other hard data to “anchor our numbers” to each site “before the city got a plan out the door,” Mr. Richardson says.

Was this to shame them, this writer asks? “No,” Mr. Richardson corrects. “It’s to show the opportunities that are there if you’re not tied down by local political considerations.”

“I think that [the city] is actually pretty grateful that we exist,” Ms. Blonder adds. “We ended up doubling the number of units they targeted.”

For instance, on this lot beside Kennedy station (which also sports an abandoned, one-storey auto repair shop) Smart Density illustrates, in an eight-page report, that three towers – one at 36 storeys, another at 20 and a third at 19 – would provide more than 800 units, a community centre, school and daycare facility. The towers, it should be noted, would respect all legal setbacks from the railway corridor to the east and the hydro corridor to the north, and the distance between the towers and their angular planes (to transition to the low-rise neighbourhood beyond the hydro corridor) would adhere to city guidelines. Most importantly, however, there would be more than enough market-rate ownership units and market-rate rental units to enable the city to provide one-third as affordable rentals.

“We need to make these buildings big enough to make the affordable component, the green component, all the math work,” Mr. Richardson says, “and it only works if you’re going to step over what the planning guide from 20 years ago said for this district.”

And that’s the rub: Parking for hundreds of cars just won’t cut it in the 21st century, even in car-centric Scarborough. As Ms. Blonder points out, she jumped on a GO train at Union Station and stepped off at this site in less than 20 minutes … that’s not the Scarborough our grandparents knew. And, remember, Toronto expects to welcome hundreds of thousands of new residents in the next few decades. Where will we put them?

Yes, some will protest the loss of parking (it happened at a Housing Now site at Wilson subway station) and residents of single-family homes will worry that shadows will fall on their patios (Ms. Blonder assures me that at Kennedy the hydro corridor buffer will prevent that). But, since these six sites are going to be developed no matter what, what’s better? The city’s estimated 1,400 to 1,700 units, which would provide 530 to 620 affordable-rent units. Or HousingNowTO’s estimate of 2,600 – 2,700, which would generate 900 affordable units?

“This is tabula rasa,” Mr. Richardson finishes. “You could have shovels in the ground here really quickly, [in] these big suburban parking lots near transit.